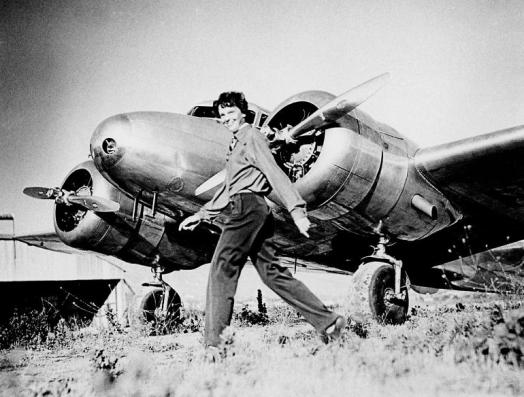 Amelia Earhart and her Lockheed Electra aircraft in 1937. The famed aviator and her navigator mysteriously disappeared in 1937 somewhere over the Pacific Ocean. Creative Commons

The hunt for Amelia Earhart’s long-lost plane took a new turn after searchers reportedly identified a piece of the missing aircraft near a toll in the southwestern Pacific Ocean. History buffs have long speculated that the tiny island, called Nikumaroro, was the final resting place of the famed aviator; however, this is the first time a piece of wreckage found there has been recognized as a fragment from Earhart’s plane, according to Discovery.

The aluminum piece measured just 19 inches by 23 inches and was actually recovered in 1991. It wasn’t until recently that researchers with the International Group for Historic Aircraft Recovery, or TIGHAR, who have spent 25 years making sense of Earhart’s mysterious disappearance in 1937, linked the fragment with a patch of metal that was installed on Earhart’s twin-engine Lockheed Electra during an eight-day stay in Miami, Florida. Only one photograph of the patch exists, likely indicating that the repair was never recorded.

If the rivet pattern from the repair in the photograph could be matched to a rivet pattern on the piece of wreckage, it would provide, with a high degree of certainty, evidence…