Originally posted on The History Bandits. 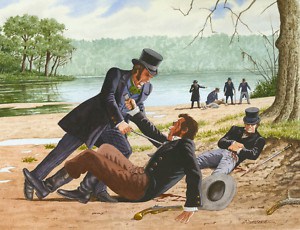 Seventeen men stood on a sandbar as the Mississippi River rolled past on either side of this small spit of land. The site had been selected for the meeting because, as a transient sandbar, it stood outside the jurisdiction of both Louisiana and Mississippi’s anti-dueling laws. It was September 19th, 1827, and the men on both sides had travelled many miles to see the culmination of an ugly set of grievances that had originated in Alexandria, Louisiana over voter fraud, slanderous talk, and business disputes. Samuel Levi Wells and Dr. Thomas Harris Maddox squared off with pistols. Each fired two shots, each missed, and the duel ended with a handshake between the two men.

The brawl that would become known as the Sandbar Fight commenced shortly after, making one of its participants, and his weapon of necessity, nationally renowned.

Many of the men who had come to the sandbar that day had their own share of animosity towards the members of their opposing side. Dr. Richard Cuny, attending as the surgeon supporting Wells in the duel, had previously sparred with…

via Selling the Sandbar: Marketing the Bowie Knife | The History Bandits.