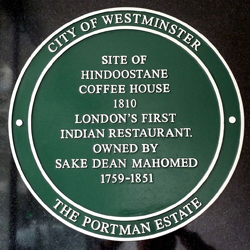 Described as the first dedicated Indian restaurant in Britain, the Hindoostanee (also spelt Hindoostane) Coffee House was established by Dean Mahomet (later Sheikh or ‘Sake’ Dean Mahomet), an Indian who served with the East India Company Army before coming to Britain.

Accompanying East India Company man Godfrey Baker to Ireland, he lived initially with the Baker family before meeting and marrying a young woman while learning English and subsequently establishing his own household in Cork.

In 1794, he published a book, The Travels of Dean Mahomet, which, written as a series of letters to an imaginary friend, described…