A picture of one of 1999 Russian apartment bombings.

Today is the nineteenth anniversary of the start of the Russian apartment bombings, when Vladimir Putin orchestrated a series of attacks that killed hundreds of citizens across Russia in order to boost his popularity and win…

via Nineteen Years | In Times Gone By…

Interview with Holocaust survivor Israel Arbeiter.  Sadly, it seems to end when you feel there must be a great deal more he wants to say.

The inscription roughly translated reads: ‘Knight of St. George, a pupil of La Bössiere’s father, both in London and in Paris, the reputation of the greatest practitioner of fencing was equally appreciated as a musician.’ PORTRAIT BY MATHER BROWN (C. 1753)/PUBLIC DOMAIN

The 40 years between the American Revolution and the defeat of Napoleon gifted the world some wonderful music. From Haydn’s string quartets, through Mozart’s symphonies, to Beethoven’s dazzling works for piano—a music lover could paddle around the period forever. But one great figure of the age is often ignored: Joseph Bologne, also known by his noble title the Chevalier de Saint-Georges. This is a pity. A person of…

Source: The ‘Black Mozart’ Was So Much More – Atlas Obscura

A more sympathetic look at Aaron Burr, the man who killed Alexander Hamilton…

Source: The Most Hated Man In American History | JSTOR Daily 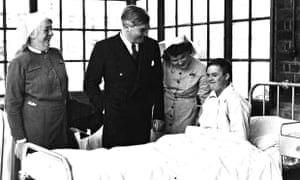 In the pantheon of Labour heroes, indeed among 20th-century politicians as a whole, Aneurin Bevan enjoys one of the foremost places. His towering achievement was the creation of the National Health Service, which he drove through in the teeth of bitter opposition from both the medical profession and the Tories. To this day his legacy – a health service available to all, free at the point of use – is the one part of the postwar consensus that has survived more or less intact the ravages of Thatcherism and the global market.

But all great men have their flaws and, as this lucid, well-researched biography concedes, Bevan’s were…

“No organist can manipulate the stops and keys of his instrument with more dexterity than the demagogue exhibits in playing upon the different weaknesses, errors, and absurdities of the untutored m…

Johan van Olden Barneveldt was a statesman who played an important role in the Dutch struggle for independence from Spain. His name is also associated – at least, according to British accounts – wi…

Our ancestors had a lot of processions and when a community wanted to make a statement they often did it with great drama. Lord Bute brought in a tax on cider in 1763 to help fund the ongoing Seven Years’ War. This was a potential disaster for the apple growing regions of the west country and the south east. This is from the Leeds Intelligencer, regarding Ledbury Gloucestershire:

“A procession was made through the principal parts of this town by the servants of he Cyder Merchants Coopers, Farmers, and some…

Source: Death of the Cider Industry

On February 18, 2014, Tom Cutterham asked, “Was the American Revolution a Civil War?” According to Cutterham, understanding the Revolution that way might be useful. If we did, he suggested, “we’d better understand the way the modern world—the nexus of state, citizen, and property—was born in and determined by violence.”[1]

Was the American Revolution a “civil war,” though? I mean, seriously? Or, is framing the Revolution as a…

Source: Seriously, though, was the American Revolution a Civil War? « The Junto.

As its full name suggests, Ackermann’s Repository was not just a fashion periodical but covered a wide range of subjects within its pages. The magazine included travel writing and poetry, comments on the arts and details of new publications, society reports, forthcoming lectures and musical reviews. It also included more serious material – a ‘retrospect of politics’, reports on law, medicine and agriculture, a meteorological journal and details of the London markets.

Cultivating a taste for the arts

In the first issue, published for January 1809, Ackermann included an ‘introduction to… 2015 is the Year of the Big Anniversary, it seems. They just keep coming. Here’s another one for you: this year is the 150th anniversary of the publication of Alice’s Adventures in Wonderland, by Lewis Carroll. It was published in London by Macmillan & Co on 26 November 1865 with 42 illustrations by John Tenniel. This is key, because immediately the words and the pictures formed a symbiotic relationship which informed everything to do with Alice from that day hence, influencing how other illustrators, film-makers, producers etc visualised and presented and re-presented Alice to this day.

Alice in Blunderland by John Tenniel, 1880

No where is this better demonstrated than at a new exhibition which opened this week at the Cartoon Museum: Alice in Cartoonland.

As it happens, Charles Dodgson (i.e. Carroll) fancied himself as something of an illustrator and despite being turned down by various journals (“not up to…