We would once again like to welcome back to our blog, Classics teacher and author of  The Elephant of Exeter Change: A Tale of Cruelty and Confinement in Georgian London, William Ellis-Rees.

William’s guest post this time has as its subject, Empress Josephine, the wife of Napoleon Bonaparte.  Josephine is of course extraordinarily famous, and many biographies of her have appeared over the years.  However, William’s research has unearthed a curious story which does not appear…

The life of a sailor has never been easy, and during wartime, it is doubly true. It was particularly so in the Royal Navy at the beginning of the 19th century.

Britain was embroiled in a struggle against France, which had recently succumbed to revolution. Napoleon Bonaparte had become ruler and he…

On the 10th of January 1810, the divorce ceremony of Napoleon Bonaparte and his wife Joséphine was performed as a grand social gathering, with each of the parties reading out a statement of devotio…

It’s been a while since we looked at any transfer-printed pottery on the Printshop Window and so I thought I’d share these images of a creamware jug which came up at auction recently.

The jug was manufactured by the Cambrian Pottery Company of Swansea and is dated 1st April 1814. The design is somewhat unusual in that it is an original composition rather than a copy of an existing caricature print. It was drawn and engraved by James Brindley, an English engraver working in Swansea for a period of about five years between 1813 and 1818. Brindley produced this image and another satirical design, entitled Peace and Plenty, specifically for use in the potteries. We know Brindley was responsible for creating these two designs because his signature appears on both, although David Drakard points out that it was obliterated from later transfers, possibly because “confirmation that both the design and the engraving was not their own work was too much for the Cambrian Pottery” (Drakard, p.248).

Napoleon Bonaparte is known for two things, conquering most of Europe and being short. Napoleon being short is true if we compare his height to now a days standards but for back then he was of average height.

In modern international units, Napoleon was about of 5 feet 7 inches and the average height of a male in France at that time was about 5 feet 5 inches in modern times. So for that time he was  considered rather tall.

However, there is still evidence that Napoleon was already considered short at the time of his death even though he was above average heigh among other French people. This is because his personal bodyguards were tall and broad. So wherever he went, he always looked smaller compared to his bodyguards earning him the title “Le Petit Caporel” or in English “The Little Corporal”. 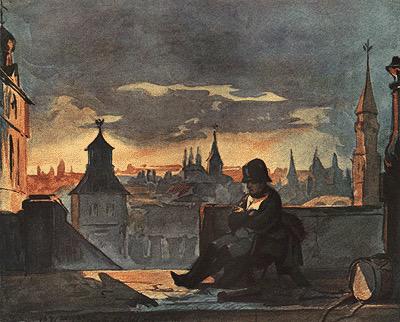 “We had light baffling weather all day. In my conversation with General Buonaparte, the only thing which passed worthy of notice, was his remarking to me, amongst other things, that he had been placed in chief command, as a general officer, at twenty-four years of age; and that he made the conquest of Italy at twenty-five. He said he had risen from nothing, to be Sovereign of his country (as Consul) at thirty; and that if chance had caused him to have died, or to have been killed the day after he entered Moscow, his would have been a career of advancement and uninterrupted success, without a parallel; and that the very misfortunes which afterwards befell the French army, would in such case probably have tended rather to the advantage than disadvantage of his fame. Though unavoidable, they would certainly, then, have been attributed more to his absence, than to…

My Dear Stuart, I send you my dispatches, which will make you acquainted with the state of affairs. You may show them to Talleyrand if you choose.
‘General ________ has been here this day to negociate for Napoleon’s passing to America, to which proposition I have answered that I have no authority. The Prussians think the Jacobins wish to give him over to me, believing that I will save his life. Blücher wishes to kill him; but I have told him that I shall remonstrate, and shall insist upon his being disposed of by common accord. I have likewise said that, as a private friend, I advised him to have nothing to do with so foul a transaction; that he and I had acted too distinguished parts in these transactions to become executioners; and that I was…

Pierre Viriot was a promising French soldier who wound up on the bad side of both the Napoleonic and the Bourbon regimes. His sad tale shows the power of Napoleon’s police to ruin a man’s life.

Pierre François Viriot was born on September 20, 1773 in Nancy, in northeastern France. His father, also called Pierre, had distinguished himself as a soldier in the Seven Years’ War. His mother, Jeanne Françoise Lemaure (or Lemort), gave birth to at least 11 children and was particularly long-lived, dying at the age of 95 (or 101) in 1827.

At age 15 Viriot entered a military training school at Pont-à-Mousson. At age 17, in January 1791, he enlisted in a regiment of hussars at Chamboran. After two campaigns in the Moselle, Viriot was sent to the Vendée, in the west of France. He fought against the royalists known as Chouans. In 1793, he married Marie-Françoise-Constance Calonne. They had four sons.

By the fall of 1800, Pierre Viriot, then age 27, was a captain of hussars and bore the scars of 14 wounds – five from swords and nine from firearms. One of them had taken out his right eye. He might have gone on to a…

What if i was to tell you one of the things you have heard about Napoleon Bonaparte isn’t true. I am talking about the myth that he was short.

The myth  itself seems to stem mainly from the fact that he is listed at 5ft 2 inches at the time of his death. This however is swayed by the fact that these were French units. In modern international units he was just shy of 5ft 6 inches.

Now i pretty much know most of you are going to say “well to be honest that still makes him pretty short”. This is true by modern day standards in certain places in the world. However at the time in France the average height for a man was actually 5ft 5 inches in modern day international units, so actually his legendary small stature made him somewhat a giant in his native France.

Napoléon Bonaparte’s final defeat was the Battle of Waterloo in 1815. Even after his death in 1821, the surviving soldiers of Grande Armée revered his historic leadership. Each year on May 5, the anniversary of Napoléon’s death, the veterans marched to Paris’ Place Vendôme in full uniform to pay respects to their emperor.

These photographs were taken on one of these occasions, possibly in 1858. All the men — at this time in their 70s and 80s — are wearing the Saint Helena medals, issued in August 1857 to all veterans of the wars of the revolution and the empire.

via c. 1858: Photos of Veterans of the Napoleonic Wars.

Believe me, the family gathering depicted in these two murals has more tales to tell than most. They could be the very depiction of Tolstoy’s famous opening to the tragic novel Anna Karenina: (and I paraphrase) all happy families look alike, but the unhappy ones are unhappy in their own inimitable way. I leave you to decide which sort we have here.

But before the stories, first a little about the murals’ setting. They face one another across the top of the grand staircase in the Palais Masséna in Nice. This imposing house was one of the last of its kind to be built on the Promenade des Anglais, looking

out on the sparkling blue Mediterranean.  It was designed by Danish architect Hans-Georg Tersling (1857-1920),  and  finished in 1901. By then Nice had long been a thriving upper class resort, a trend begun in the 1730s when British aristocrats…

Background: The Battle of Waterloo was fought south of Brussels between the Allied armies commanded by the Duke of Wellington from Britain and the 72-year-old General Blücher from Prussia, and the French under the command of Napoleon Bonaparte. The French defeat at Waterloo brought an end to 23 years of war starting with the French Revolutionary wars in 1792 and continuing through the Napoleonic Wars. There was an eleven-month respite with Napoleon forced to abdicate and exiled to the island of Elba. The unpopularity of Louis XVIII, however, and the social and economic instability of France brought Napoleon back to Paris in March 1815. The Allies declared war once again. Napoleon’s defeat at Waterloo marked the end of the so-called ‘100 Days,’ the Emperor’s final bid for power, and the final chapter in his remarkable career.

Why did Napoleon lose?

The battle was closely fought; either side could have won, but mistakes in leadership, communication, and judgment led, in the end, to the French defeat. Wellington said his victory was…