Although there are the grand tapestries, Great Hall and Long Gallery, as well as all the trappings of magnificence, there are corners of Haddon Hall that do not feel like a grand and glorious Country House. They simply feel like home. Being midwinter, I think we may have seen the interior, at least, at its best… though I would love to see the gardens in summer. Roaring fires, the scent of pine and woodsmoke hanging, heavy as incense, in the air of low-ceilinged rooms, all make the place…

Other than the Elizabethan connection, we really had, at that point, no idea why we had felt the need to visit Haddon Hall. We knew little about the place, apart from the legend of the romantic elopement of Dorothy Vernon and the fact that ‘ye harmytt’ of Cratcliffe Crags had supplemented his hermit’s income by supplying rabbits to…

Other than the Elizabethan connection, we really had, at that point, no idea why we had felt the need to visit Haddon Hall. We knew little about the place, apart from the legend of the romantic elopement of Dorothy Vernon…

The Vernons mentioned are my forbears!

Every time we had driven past Haddon Hall, I had the feeling we needed to go there. The feeling bugged me a bit, as stately homes have not really been part of our research. We tend to be drawn to the landscape and sites things five thousand years old, rather than five hundred, so I could not see why…

via A visit to Haddon Hall | Sue Vincent’s Daily Echo

Embarking on a biography of Henry III was an exciting but daunting task. He is a king many might struggle to place in English history. Men like William Marshal and Simon de Montfort have made more …

For most people in the Anglo-Saxon world at least, Danish history is a blank, perhaps filled in only by vague memories of Hamlet’s line “something is rotten in the state of Denmark”. I’m going to write about one of the most significant figures in 18th century Danish history and possibly one of the most intriguing political figures I have ever…

On May 10th and 11th of 1536, the Grand Juries of Middlesex and Kent had arraigned Queen Anne Boleyn on various charges. These included adultery with Sir Henry Norris, Sir William Brereton, Sir Francis Weston and musician Mark Smeaton. She was also charged with incest with her brother George Boleyn, Lord Rochford. There were charges of plotting the King’s death with some of these men along with giving them gifts.

On May 15, in the King’s Hall in the Tower of London, Anne went to trial. The court was presided over by…

Today’s grotesque is a true classic. The gargoyles of Notre Dame cathedral in Paris are neither the oldest nor the most interesting of their kind, but they have certainly become the most famo…

Readers of this blog probably know that early-modern book bindings contain hidden treasure: fragments cut from medieval manuscripts, ranging from small snippets to full pages. The fragments were placed inside bindings to reinforce the bookblock and to provide support for the boards (see this post I wrote about it, and this one as well). This recycling process – plain-old slicing and dicing, really – was common practice, old-fashioned as handwritten books had become after the invention of print. In fact, medieval pages are found in as many as one in five bindings of printed books from the sixteenth and seventeenth centuries.  While the stowaways are normally hidden from our eyes, we sometimes get to meet them face to face when…

I came upon these pair of bad boys standing guard outside the Town Hall on a recent family trip to Youghal in County Cork. Now whilst they are not per say, a normal Ruinhunting attraction, they do play an important role in the history of the town, which dates back to early Christian times when the likes of St. Corán and St. Declan of Ardmore fame were said to have established monastic settlements here during the fifth century. Youghal or Eochaill to give it its old name which means “yew wood” also became an important base of operations for our friends from the north whom established a Viking settlement here during the ninth century. By 864 A.D. the Viking fortress at Youghal had been destroyed by the local Deisi clan. Then in 1173 a great battle took place at sea, when a Norman fleet whom had just raided nearby Lismore…

Located at the junction of Cheapside and Poultry, the Great Conduit, also known as the Cheapside Standard, was a famous medieval public fountain.

The Great Conduit (the word conduit refers to column fountains fitted with ‘cocks’ or taps for dispensing the water) gave access to water piped using gravity four kilometres from the Tyburn into the City largely via lead pipes.

It was constructed by the City Corporation from the mid-13th century after King Henry III approved the project in 1237. It was rectangular-shaped timber building with an elevated lead tank inside from which the water was drawn.

It took the name ‘Great’ after further conduits were built further west in Cheapside in the 1390s. There were at least 15 conduits or standards scattered about the City by the time of the Great Fire in 1666.

It was rebuilt several times over its life, notably in the reign of King Henry VI, but after being severely…

Wheel of Fortune page from the manuscript Carmina Burana. Photo from Wikimedia commons.

I’ve been working on a dance routine to “Carmina Burana” and wanted to do some research on the history of the piece. I was planning to write more about gargoyles this week, but I decided to write about this instead when I saw a picture of the original medieval manuscript.* 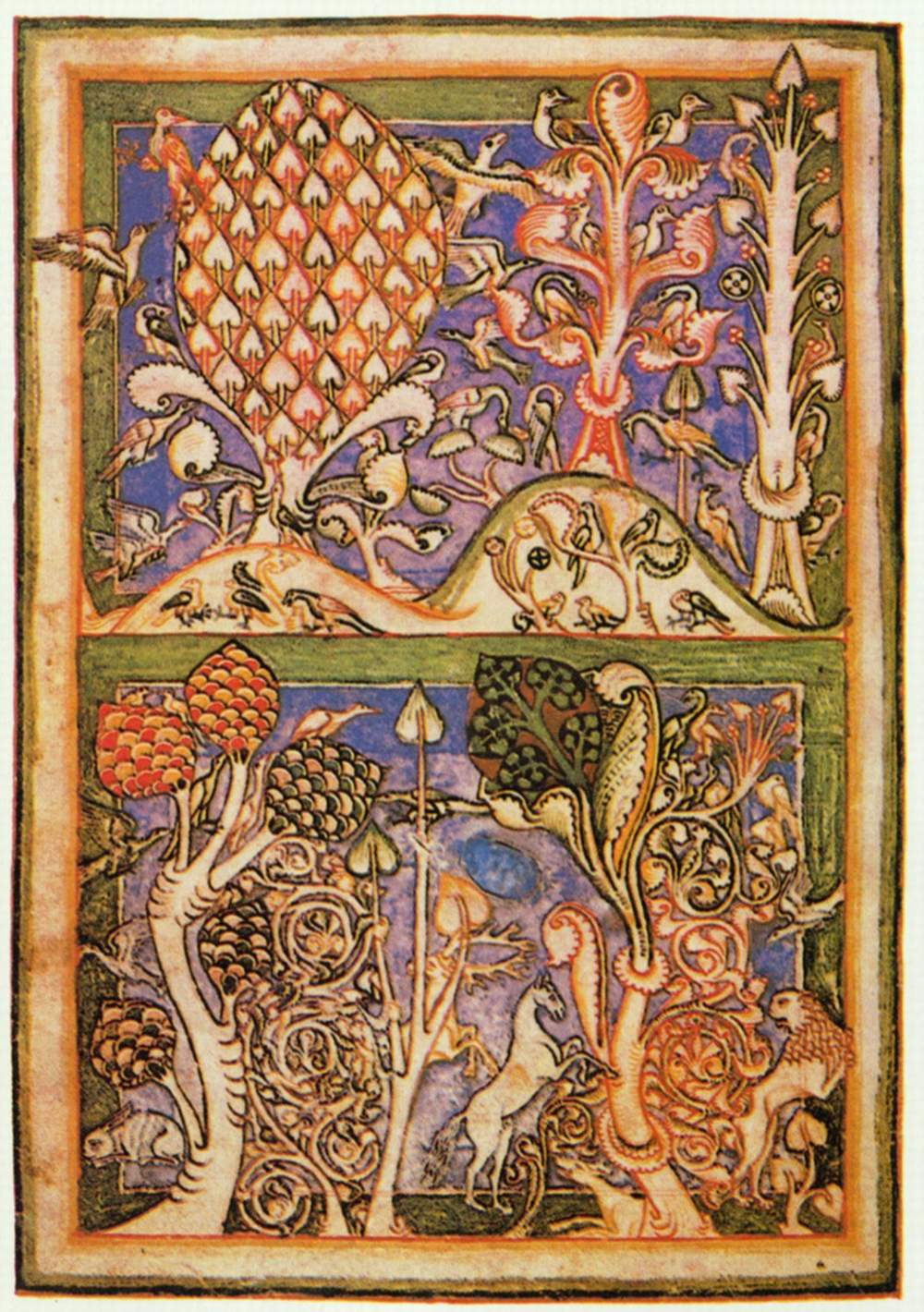 A scene from the manuscript Carmina Burana. By Meister der Carmina Burana [Public domain], via Wikimedia Commons Before it was a well-known piece of music, the Carmina Burana was a Gothic manuscript containing eight illustrations and two hundred and fifty-four poems, primarily in medieval Latin with some in old German, from the eleventh through thirteenth centuries. (1) It was created around 1230 and discovered in the library of the Benediktbeuern Abbey in Bavaria in 1803. While likely originating from somewhere in that area, the Carmina Burana was not necessarily created at the Benediktbeuern Abbey, though…

ArchaeoFox: Exploring the World Through the Past

I stood outside the boathouse and with both hands, pressed against its enormous red doors; the flakes of paint coming off and sticking to my fingers as I entered. The bow staves we ordered the previous year had arrived the day before I left Lofoten, but I was assured that they were now safely tucked away somewhere in the boathouse; ‘somewhere’.

I walked inside, but the year had made me forget how big it was. Filled in every corner of its wooden walls were the artefacts of a museum’s long history. Many tar stained ropes looked down at me as I stepped over a couple of old rowing oars. They were leaning against a crooked table that was neatly set with rusty tools, a half closed bucket of paint and a Coke bottle, oranged from the linseed oil. I spotted the shape of a large, straw archery target that stood out from the shadows in the back; tattered…

Originally posted on London My London.

IN LONDON OLD AND NEW published in 1878 Walter Thornbury described the Roman Bath as one the “few real and genuine remains which date from the era of the Roman occupation of England”. Charles Dickens is believed to have taken a cold dip in one of the two fashionable baths and, if he didn’t, he certainly sent David Copperfield there for “many a cold plunge”.

William Newton observed, in his “London in the Olden Time”, that it is “without doubt a veritable Roman structure, as an inspection of its old walls will prove”. Thurlow Weed, in the 1840s reported that it was used now as it has been for centuries, for bathing, and, though situated in Strand Lane, not six rods from the Strand, “I do not believe its existence is known to one thousand of the…

via London My London | One-stop base to start exploring the most exciting city in the world.