An aside into Victorian business life is the fact that when a London solicitors sent a letter on April 27 1885, its headed paper quoted the firm’s telephone number. The number was 1095 and th…

In Victorian London, most of the poor lived in what would be called slum housing. During the 18th century, many ramshackle ‘courts’ had been built as a result of speculative infilling beh… 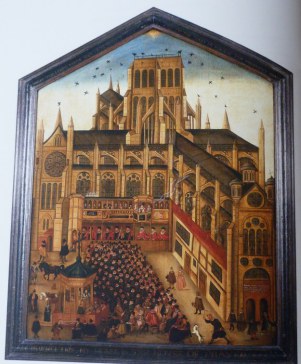 On this day in 1561, “old” St Paul’s Cathedral (*) lost its spire in a lightning strike (see also February 1st and July 2nd postings). “Old” St Paul’s was built in the Norman, or Romanesque,…

On this [25th December] day in 1657, during the Commonwealth and Protectorate of Oliver Cromwell that followed the Civil War, John Evelyn wrote in his diary:

“I went to London with my wife, to celebrate Christmas day, Mr Gunning preaching in Exeter chapel … .  Sermon ended, as he was giving us the Holy Sacrament, the chapel was surrounded with [Parliamentarian] soldiers, and all the communicants and assembly surprised and kept prisoner by them … .  It fell to my share to be confined to a room …, where yet I was permitted to dine with the master of it … and some others of quality who invited me.  In the afternoon came Colonel Whalley, Goffe, and others … to examine us one by one; some they committed to the marshal, some to prison.  When I came before them…

This is from an article by Boyd Tonkin on events to honour the 330th anniversary of the arrival of 50,000 Protestants who fled the terror of France:

In the handsome 1720s house on Fournier Street where she runs an antique business and café, Fiona Atkins unrolls a large and beautifully detailed hand-drawn map. Created by the artist Adam Dant, it records the addresses of around 300 Huguenot families who lived in Spitalfields in east London.

They were part of the great wave of French Protestant migration that transformed London, and England, after Louis XIV in 1685 cancelled the civil rights granted to them by the Edict of Nantes. The map  is just one of 100 or so events in this year’s “Huguenot Summer” season. It remembers and celebrates their contribution, not only to London but to 20 towns where the French settled from Canterbury to Norwich, Plymouth to Rochester.

Organiser and Spitalfield resident Charlie de Wet, who staged her first festival in 2013, has just returned from a talk in Plymouth. There, after the diaspora took root, “a third of the population were Huguenots, and nobody knows about it@. when she started to arrange Huguenot themed event,s she began to realise that people didn’t now the value of the Huguenots or what their contribution was. ”

“All we want to do,” she says, is to give them credit for what they have done.” …On Brick Lane, walkers will pass the elegant temple that serves as the ultimate monument to London’s diversity. Built in 1743 as the Nouvelle Eglise for Huguenots, in 1809 i became a Wesleyan chapel; in 1898 the Great Synagogue of Spitalfields, and in 1976 the Jamme Masjid for the district’s more recent Bangadeshi incomers.

Still a lightning-rod for collective anxieties, the word “refugee” entered the English language when the Huguenots landed. About 50,000 French Protestants came to England.. Another 10,000 fled to Ireland, part of an exodus of perhaps 200,000. Other large contingents went to…

View from the Mirror

Nearly three years ago when this blog was in its infancy, I wrote a piece about ‘Doctor Salter’s Daydream’ statue; a public sculpture which was sadly stolen (most likely by scrap metal thieves) in November 2011. 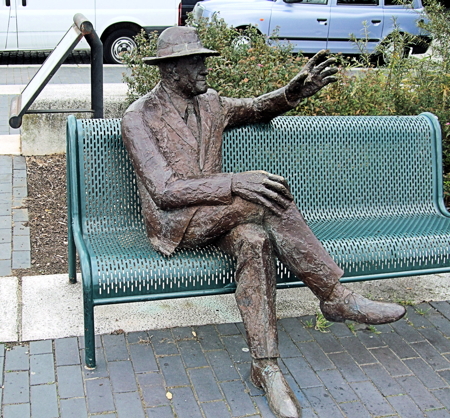 The statue’s theft was all the more cruel considering the background of the man whom it represented; Dr Alfred Salter, a humble Quaker born in Greenwich in 1873.

Aged just 16, Alfred won a scholarship to study medicine at Guy’s Hospital where he proved to be an outstanding student.

After qualifying as a doctor, Alfred and his beloved wife, Ada vowed to dedicate themselves to helping London’s poor and set up a practice on Bermondsey’s Jamaica Road, then at the heart…