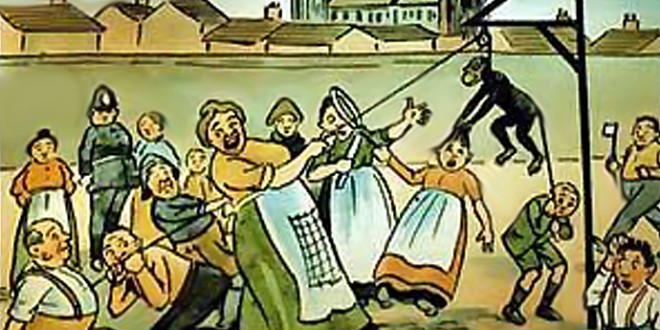 What do you know of the Hartlepool Monkey and the “Monkey Hangers”? I certainly knew nothing of the tale until I stumbled across it. Legend says that a shipwrecked monkey was hanged as …

Source: Hanging a Monkey as a French Spy During the Napoleonic Wars | ReginaJeffers’s Blog

Originally posted on The Witch, The Weird, and The Wonderful.

Tales of bells that have been lost to the sea are a familiar occurrence in many legends, especially those that take place around Britain’s coastline. Whether lost by bad weather, bad luck, or punishment for a rash word spoken in anger, here are a selection of Britain’s drowned bells.

The Legend of Kilgrimol:

This tale is located at Lytham St Anne’s near Blackpool in Lancashire. Not far from the shore it is said that a church and its churchyard lie submerged beneath the waves. Known as Kilgrimol, there have been several explanations for what happened to the ill-fated church. Walter Thornber in his History of Blackpool and it’s Neighbourhood states that an earthquake caused the disaster, whereas other sources report a violent storm as the cause of the disappearance.

This story is founded on a degree of fact, and according to a 17th century source there was indeed…

Source: The Witch, The Weird, and The Wonderful: Drowned Churches and Ghostly Peals: Britain’s Lost Bells