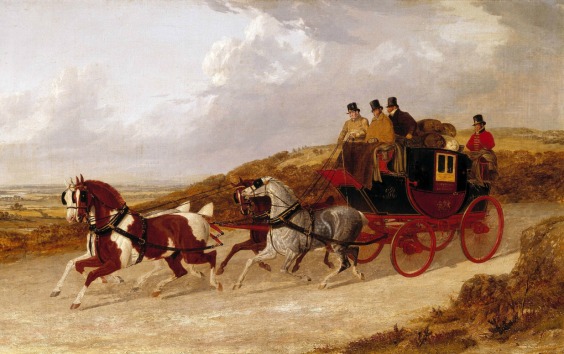 The Edinburgh and London Royal Mail by John Frederick Herring, 1838.

One night in 1894, while on the mail route from Ramsgate to Dover, the driver of a mail cart was attacked by two armed men.  According to the Leeds Times, he was “cut about the head and face” and t…

Coachmen were the people entrusted with the management of a person’s carriage and horses. It was important they be reliable, honest, and wise, as a traveler’s safety depended on these traits. For instance, when traveling in a coach, loose nuts and bolts was a frequent occurrence, and, “a Careful Coachman” was said to be the person willing to check the coach every fortnight for any possible loose nuts or bolts and then screw them tight but also do it with such “care [as to] not to injure the Paint with the Wrench.”

There were also fifteen things a good Georgian coachman would not do. Here they are in their entirety.

He will not gratify a greedy Innkeeper, Hackney man. Hay Fanner, Coachmaker, Sadler, or other Tradesman, at the expense of his Employer; but, in laying out his Master’s Money, will be as careful as if it was his own.

He will not leave his Master to the care of the…

Source: 18th and 19th Century: Fifteen Things a Good Georgian Coachman Would Not Do.

We do love our period costume dramas, don’t we?

I mean, what could be more restful than slipping back into a slower age, a more peaceful idyllic age, when horses clip-clopped their ways across the country, the corn was green in the fields, they wore elegant clothes that looked soft and weren’t all black, and society was stable and one found one’s Captain Wentworth or John Thornton in a garden of yellow roses? Or driving a high-perch phaeton with scarlet-wheels, wearing an eight-caped greatcoat, with a team of matched greys?

And that must be how it was, mustn’t it, because Austen for one never mentions a world beyond that charming and charmed existence, does she?

But here’s the thing, we tend to forget that…

via English Historical Fiction Authors: In and Out of Jane Austen’s Window.