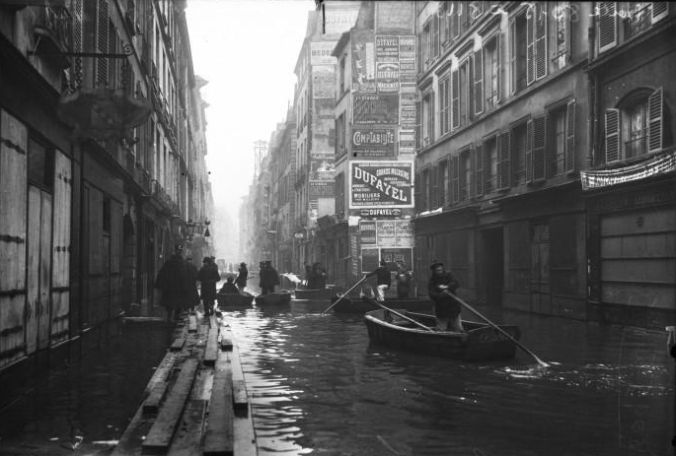 In the last week of January 1910, the Seine River flooded the city of Paris and its surrounding neighborhoods causing an estimated 400 million francs worth of damage. Fortunately, no deaths were recorded, but Parisians suffered the indignity of being stranded in the homes and or in the streets of Paris. Emergency services and the military were forced to make headway through the saturated streets in boats to rescue people from second-storey windows and to distribute relief aid. At the conclusion of the emergency crisis that gripped the city, many Parisians were left to wonder what happened?

In the weeks leading to the flood, heavy winter rainfall across northern France filled the Seine’s tributaries. When the deluge of water reached Paris on the 21st January, authorities became increasingly alarmed at the slowly rising Seine. Winter floods were a common occurrence in Paris, but when the Seine River began to rise a lot swifter than usual, panic gripped the city. Over the course of the following week, the Seine rose to an elevated height of 8.62 metres. In the city itself, the water threatened to…

Source: The 1910 Great Flood of Paris. | If It Happened Yesterday, It’s History

UK readers will recall Somerset was an inland sea just this Spring and the Thames valley filled up like a blocked drain. That was unusual, so weird weather must signal that something is happening which has never happened before, right? So-called “extreme weather events” are the clinchers to convince those doubters of man-made global change. Not one event in isolation, mind you, but these days it seems like it’s just one after another like never before. As the Met Office’s chief scientist, Dame Julia Slingo said: “all the evidence” pointed to climate change as the cause, although there was not yet “definitive proof”.

Well no, not all the evidence and no, not quite like never before.

Imagine how seductive would be that argument if the weather remains as apocalyptic as it has been this Spring in the UK.