Only hours after being awarded the French Légion d’honneur, British Lieutenant Reginald Warneford was killed in an aeroplane crash on the 17th of June, 1915. A 1919 painting depicting the moment th…

Source: On this day: the death of a war hero | In Times Gone By… 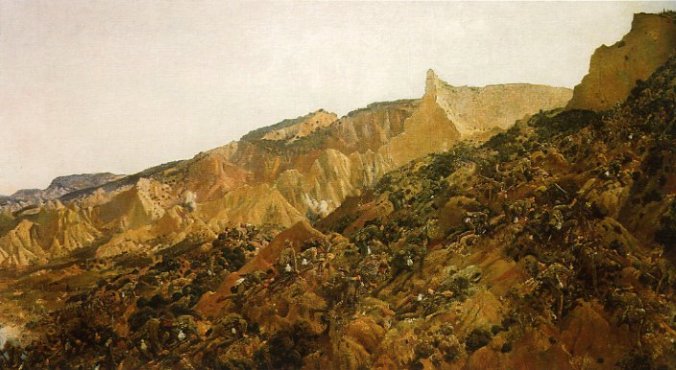 A little after four in the morning of the 25th April, the first wave of Australian soldiers rowed ashore on Anzac Cove, on the Gallipoli peninsula, after being initially towed in by steamboats, under the cover of darkness. Around four thousand men were ashore, four battalions in total, which included the 11th, in what was an astonishing tactical surprise in and around dawn. With the Turks somewhat confused with what was unfolding around them, it wasn’t long before the Anzacs (Australians) secured the beach head for the next wave of men heading into shore. Interestingly, contrary to popular belief, there was no massacre on Anzac Cove beaches. Of course, there were many casualties reported early on, but if you are looking for…

Source: What happened this month in history?

At 9.30 on the morning of Thursday 19 August 1915 the White Star Liner Arabic sailing from Liverpool for New York was torpedoed by the German submarine U-24 off Fastnet lighthouse, four miles south-west of Ireland. As in the case of the Lusitania, no warning was given by the enemy vessel and within eleven minutes the ship had sunk. There were 423 people on board, 244 cabin and 48 third class passengers, mainly women and children who were going to join their husbands in Canada, and 242 crew. However in contrast to the Lusitania there were only 44 fatalities of whom only…

May 28, 1918 French troops use flamethrowers to flush out German positions in the town of Cantigny, France. IMAGE: THE PRINT COLLECTOR/PRINT COLLECTOR/GETTY IMAGES

Though projected incendiary weapons such as Greek fire were used in naval engagements by ancient Byzantines and Chinese, the modern flamethrower made its debut in 1901, when Richard Fiedler submitted his “Flammenwerfer” design to the German Army.

Most flamethrower designs consisted of two tanks carried on a soldier’s back, one filled with a flammable liquid, the other with propellant gas. The squeeze of a trigger would send the liquid shooting across an igniter, projecting a jet of burning fuel at targets up to 18 meters away.

Source: The birth of the modern flamethrower, a psychological weapon of WWI 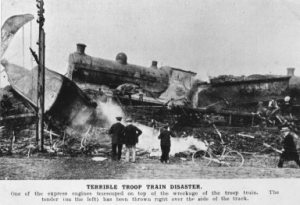 Left to official reports, whitewashed investigations and government-influenced findings, the inconvenience of history has regularly been swept aside to be forgotten, ignored or reduced to a marginalised footnote. That might well have been the fate of the tragic events of 22 May 1915 when the greatest railway disaster in British history unfolded just north of Gretna Station at a signal box at Quintinshill. A troop train carrying around 500 officers and men of the 7th Royal Scots bound for Gallipoli, ran headlong into a stationary local train and moments later the entangled wreck was hit by the night express from London. 214 officers and men were subsequently killed and over 220 injured. It was a nightmare which could not be quashed by the Defence of the Real Act, no matter how convenient that might have been to Asquith’s failing government. Journalists from Dumfries and Galloway, and Carlisle [1] reported the awful events…

Have I overdone it with the Gallipoli posts yet?! It’s very difficult not to as there are so many interesting posts out there today. 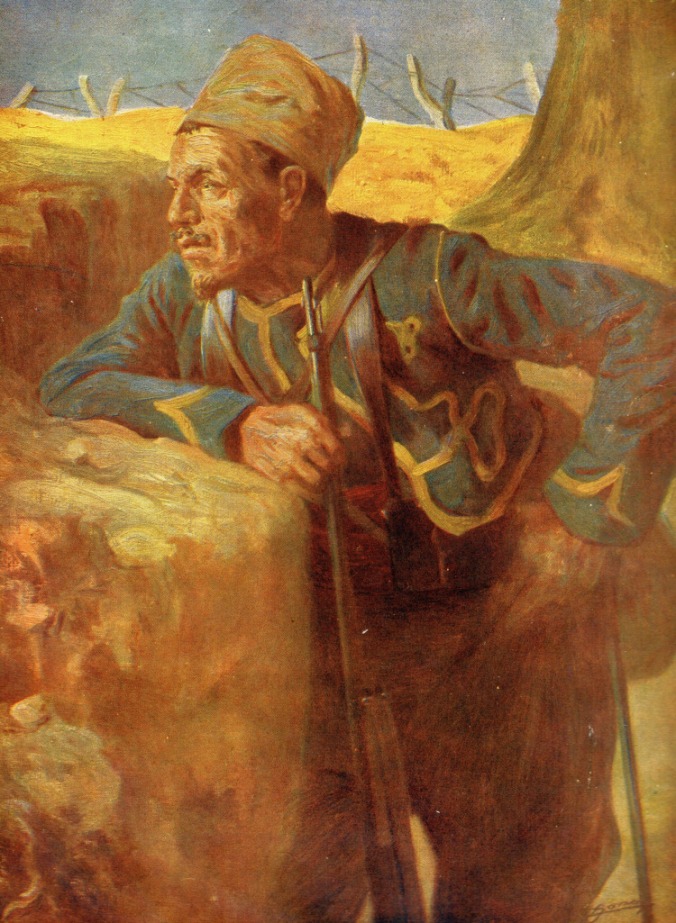 Today on the centenary of the landings at Gallipoli much focus will be on the Australian and New Zealand troops who landed there in April 1915. One of the forgotten combatants of the campaign French soldiers who served alongside their British and Commonwealth comrades.

Some 80,000 French soldiers fought at Gallipoli as part of the Corps expéditionnaire d’Orient with almost 27,000 casualties. Many of the French troops were from Colonial units drawn from the far corners of the French Empire. This image comes from a French source and depicts a French Zouave in the trenches at Gallipoli in 1915 from the 17e division d’infanterie coloniale who took part in the fighting at Krithia.

There’s a lonely stretch of hillocks;
There’s a beach asleep and drear,
There’s a battered broken fort beside the sea.
There are sunken trampled graves;
And a little rotting pier;
And winding paths that wind unceasingly.
There’s a torn and silent valley;
There’s a tiny rivulet
With some blood upon the stones beside its mouth.
There are lines of buried bones;
There’s an unpaid waiting debt;
There’s a sound of gentle sobbing in the South. 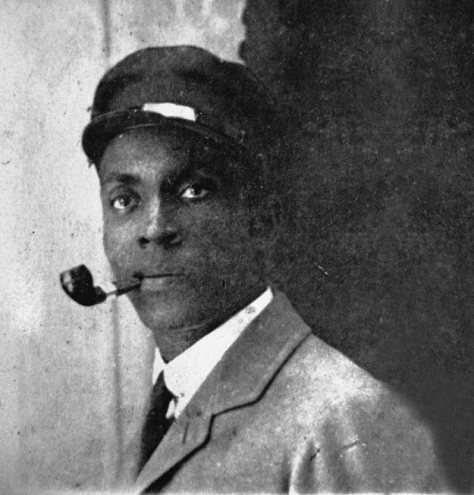 The Black Russian is the incredible story of black American Frederick Bruce Thomas, born in 1872 to former slaves who became prosperous farmers in Mississippi. Alexandrov, the author of the book and a scholar of Slavic languages and literature at Yale, begins the story on the river delta of Coahoma County, Miss.  Frederick’s parents, Lewis and Hannah attended an auction of a 200-acre farm occupying some of the richest soil in the South. Lewis with a great stroke of luck won with a top bid of $20. Four years after the Civil War and emancipation they farmed the land for a full year which earned the family more than $5,000 (roughly $80,000 today) during its first year alone. 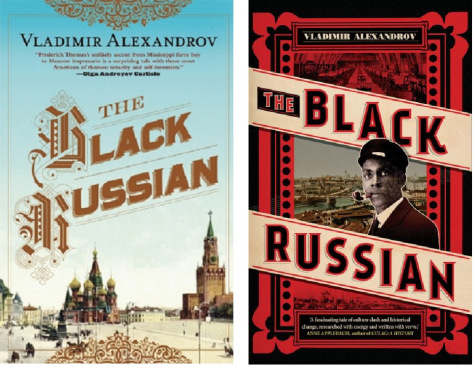 Being born into a very atypical black family of the time gave him his first taste of his future life. The author with… 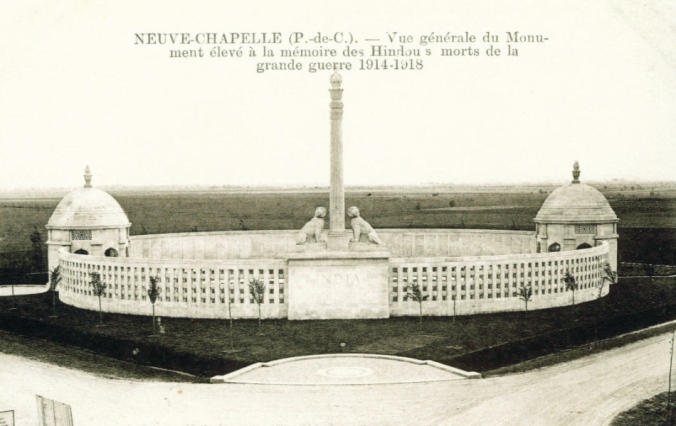 Today is the centenary of the Battle of Neuve-Chapelle, the first major British assault of the Great War. It was not the first attack on the German lines as the trench war had begun in late 1914 and in December there had been several localised attacks. But these had been small scale affairs compared to Neuve-Chapelle which saw more than 40,000 British and Indian troops make a major assault on the village. The Indian Army had taken part in First Ypres and much of the fighting in late 1914 but with the Indian Corps now accounting for a sizeable part of the British Expeditionary Force in France and Flanders this was one of their major battles of the Great War on the Western Front. 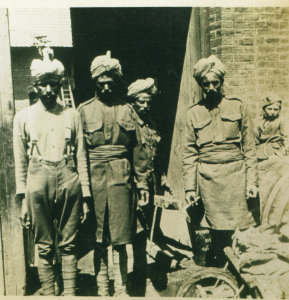 The Neuve-Chapelle Indian Memorial was designed by Sir Hubert Baker and unveiled in October 1927. It commemorates more than 4,700 Indian troops…