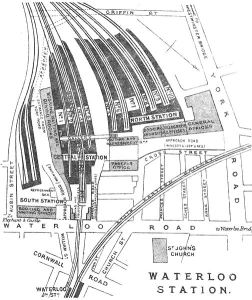 On the 11th of July, 1848 London’s Waterloo Station opened. Known at the time as Waterloo Bridge Station, it didn’t adopt its current name until 1866.

On the 1st of May 1840, the world’s first adhesive stamp was issued in Great Britain.

Called the “Penny Black”, it featured a profile of Queen Victoria.

The stamp came into public use on the sixth of the month. This particular stamp was in production until February 1841.

On the 10th of April, 1848, a “Monster Rally” of Chartists – The Great Chartist Meeting – took place on Kennington Common in London’s southeast. The event was photographed in what was one of the first pictures of a crowd ever taken.

The Chartist movement was a working-class movement for political reform, though it had faded out by 1850.

Six years later, Kennington Common was reopened as Kennington Park and to this day the area still provides that function.