Pioneering African-American Nasa mathematician Katherine Johnson has died at the age of 101.

Nasa announced her death on Twitter, saying it was celebrating her life and honouring “her legacy of excellence that broke down racial and social barriers”.

In WWII the British were desperate. Metal was in short supply, and German U-boats were sinking Britain’s lifeline – ships. The Allies needed an unsinkable…

Source: An Amazing Idea – Making An Aircraft Carrier Out of Ice and Sawdust

Will’s cigarette card from the First World War. The reverse reads: ‘As in peace time, the flag of Britain’s mercantile marine flies over two-thirds of the shipping which plies the ocean. Ship after ship is coming over the seas, bringing food and raw materials…’ © Mark Dunkley.

One hundred years ago today on 1 February 1917, Germany resumed its policy of ‘unrestricted submarine warfare.’  The seas around the British Isles were declared a war zone in which fishing vessels …

Author Darlene Foster shares the story of two great-grandmothers who despite the hardships they faced, worked tirelessly to give their families a home and provide them with the tools needed to surv…

Source: The Sunday Living History Interview – A Tale of Two Katharinas, a Legacy of Strong Women by Darlene Foster | Smorgasbord – Variety is the spice of life

William Ash was a survivor of the Nazis’ prisoner of war camps, surviving starvation, freezing temperatures, violence and slave labor.

For the prisoners who survived you’d think they would come back to capitalist society with open arms, but William Ash came back with a thorough swing to the left.

William was a Spitfire pilot with… 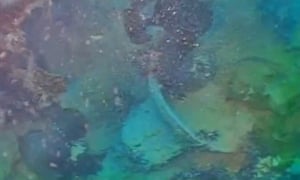 The long-lost ship of British polar explorer Sir John Franklin, HMS Terror, has been found in pristine condition at the bottom of an Arctic bay, researchers have said, in a discovery that challenges the accepted history behind one of polar exploration’s deepest mysteries.

HMS Terror and Franklin’s flagship, HMS Erebus, were abandoned in heavy sea ice far to the north of the eventual wreck site in 1848, during the…

The discovery of a suitcase filled with photographs and paintings and hidden in a cupboard in an Amsterdam flat was the beginning of a story stretching back to 1920s Berlin. Gordon Darroch unravels a mystery which plays out across the globe. Cities are shaped by their past: it courses through them like blood, unseen but vital. Charlaine Scholten’s boyfriend told her about the suitcase in his attic shortly…

After a spell in Chatham, getting to know the ship and getting everything to work, we sailed for exercises and wound-up finally anchoring in Weymouth Bay with all the other Reserve Ships, where we were reviewed by HM King George VI. On completion, it was decided that Reserve Fleet exercises would be carried out north of Scotland, based at Scapa Flow, and we were on patrol between Scotland and Iceland on Sunday 3rd September when war was declared. Emerald was a fast cruiser and after a few weeks…

Source: Memoir of a Navy Man – Eric Coleman – HMS Emerald – Operation Fish to save national treasures and a Wedding Day. | Smorgasbord – Variety is the spice of life

At 9.30 on the morning of Thursday 19 August 1915 the White Star Liner Arabic sailing from Liverpool for New York was torpedoed by the German submarine U-24 off Fastnet lighthouse, four miles south-west of Ireland. As in the case of the Lusitania, no warning was given by the enemy vessel and within eleven minutes the ship had sunk. There were 423 people on board, 244 cabin and 48 third class passengers, mainly women and children who were going to join their husbands in Canada, and 242 crew. However in contrast to the Lusitania there were only 44 fatalities of whom only…

”This “continuous journey” regulation was a masked attempt to restrict the entrance of immigrants arriving from India, a lengthy journey which necessarily included a stopover in Hawaii or Japan at the time.

The exclusionary law faced several legal challenges and was amended a few times. Its most high-profile controversy came in 1914, when Gurdit Singh Sandhu decided to challenge it directly. Singh was a Punjabi man who had become…

Source: A protest at sea: The boat that challenged Canadian immigration law

The modern traveller is used to eating recognisable and safe food wherever he or she visits in the world. Even in the less visited countries no one is surprised to find there is a McDonalds or similar fast food outlet to feed them from more or less the same menu as in any British or North American city. Likewise the traveller expects clean hot and cold water and at least basic toilet facilities. Not so for the traveller in late Victorian and Edwardian times. Then, you needed a pretty strong constitution and accepted what sustenance and limited comforts were available.

A varied Settlement of the Americas

My post on the Ten Lost Tribes: Native Americans generated more interest than I expected. This theory dates back to James Adair‘s (c. 1709 – 1783) History of the Indians, in 1775, and it is supported by Israeli scholars. (See Ten Lost Tribes, Wikipedia.) However, their entering through the Bering Strait during the last glacialperiod is not the only account of the migration of Amerindians to the Americas. Another account, besides the Ten Lost Tribes, is Welsh prince Madog or Madoc‘s story.

According to folklore, Madoc ab Owain Gwyneed, a Welsh prince and therefore a white man, sailed to America in 1170. These Amerindians were first mentioned in a cywydd, an epic poem, by the Welsh poet Maredudd ap Rhys (fl. 1450 – 83)…

Jean-Vincent d’Abbadie de Saint-Castin had several children, most of them born to Pidianske, one of the daughters of Abenaki chief Madokawando. Two are known to historians and to the curious: Bernard-Anselme d’Abbadie (1689 – 1720) and Joseph d’Abbadie(active 1720 – 1746).

Both sons continued to fight the English, which had been their father’s mission, but did so in what appears a less aggressive manner. Jean-Vincent participated in King Philips’ War (1675 -1678), a conflict which was a response to attacks on New England settlers by Amerindians. Jean-Vincent d’Abbadie had played an active role in these attacks. King Philips’ War decimated the Amerindian population of New England. Of a total of 3,400 men, only 400 Amerindians survived, but on Britain’s side, of a total of 3,500, 2,900 men survived.

Jean-Vincent d’Abbadie did fulfill his responsibilities…