Source: A sticky situation: The Christmas pudding palaver of 1952 – The National Archives blog 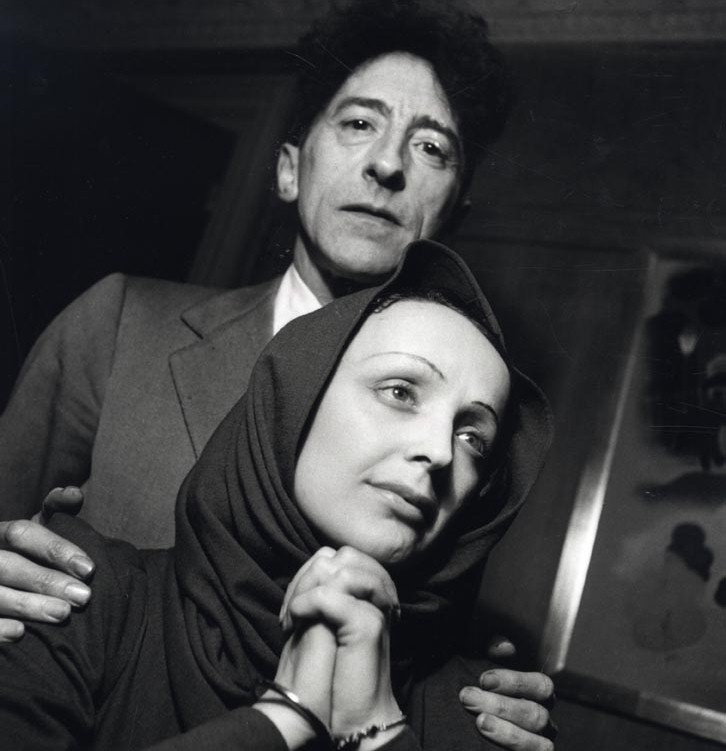 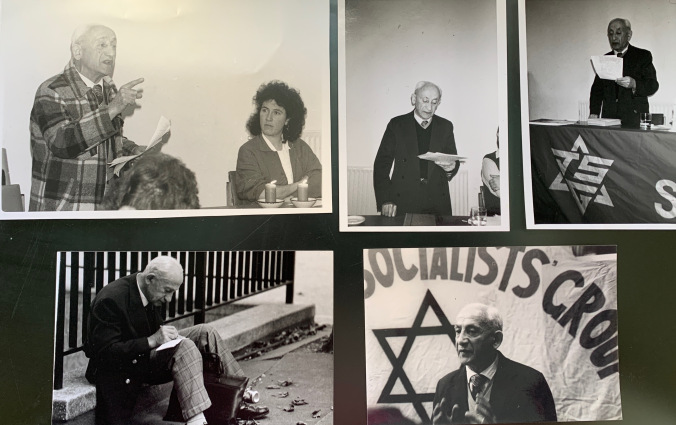 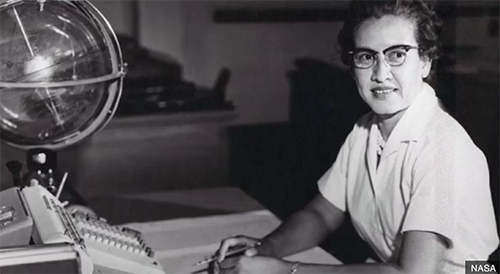 Pioneering African-American Nasa mathematician Katherine Johnson has died at the age of 101.

Nasa announced her death on Twitter, saying it was celebrating her life and honouring “her legacy of excellence that broke down racial and social barriers”. 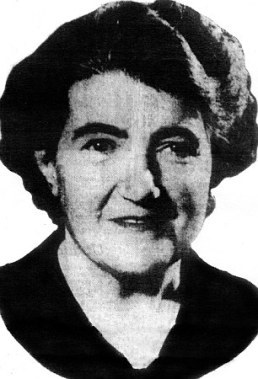 Unassuming: Dorothy O’Grady’s neighbours knew her as a guest house landlady whose greatest pleasure was walking her Labrador, Rob

To her neighbours, Dorothy O’Grady was a pleasant middle-aged woman who liked walking her Labrador around their sleepy seaside town.

So when the unassuming landlady of Osborne Villa in the Isle of Wight was suddenly arrested in 1940 on suspicion of being a Nazi spy, few believed it possible…

A shot of one of the bombs tested on Christmas Island (Image: Sunday Mirror/Collect)

For decades the MoD has denied using unwitting servicemen as “guinea pigs” in radiation experiments during the race to build a nuclear bomb.

But the widow of one Cold War pilot has blown that claim apart after obtaining secret documents that show he was used in a deadly experiment as he was ordered to fly through the cloud of a thermonuclear explosion.

And Shirley Denson, 83, said husband Eric had such a massive dose of radiation to… 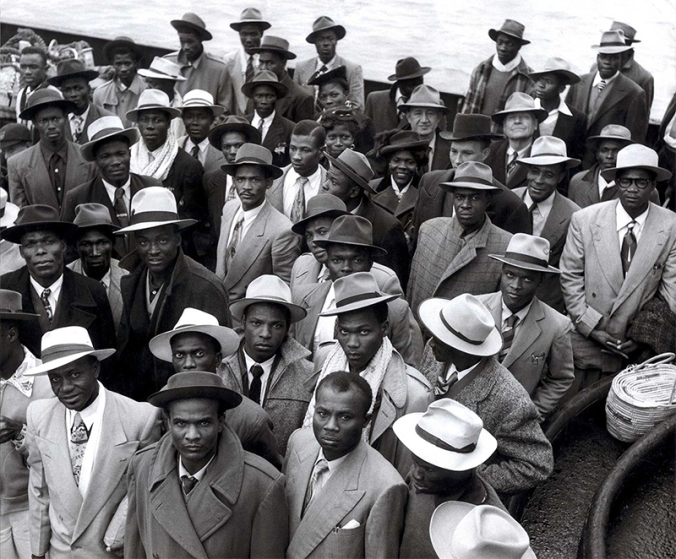 The movie Darkest Hour, in which Gary Oldman won an Oscar playing Winston Churchill, has garnered many plaudits, and deservedly so. It introduced a new generation to Churchill and the inspiring story of 1940, reminding them of how Britain stood alone for a year against the might and fury of Nazi Germany.

But it has also produced a vicious backlash against Churchill and all that he stood for and unleashed an avalanche of vitriolic abuse, much of it ahistorical and ignorant.

Henrietta Lacks in a family photo. HeLa, the cell line named for her, has been at the core of treatments for ailments like haemophilia, herpes, influenza and leukaemia. Lacks Family/The Henrietta Lacks Foundation, via Associated Press

Cancer cells were taken from her body without permission. They led to a medical revolution…

via Henrietta Lacks, Whose Cells Led to a Medical Revolution

You couldn’t possibly make it up.  A borstal boy, Windmill can-can dancer and stolen Auster aircraft make headlines for Bembridge on the Isle of Wight around the world.

On the 30th May 1949, an 18-year-old serial absconder from borstal institutions all across England broke into a hanger at Bembridge Airfield and although never having piloted a plane before took off and attempted to fly to Southern Ireland. This story made newspaper headlines around the world and put Bembridge on front pages from Hobart to Honolulu.

Brynley Fussell was a young miscreant who had spent many years in various borstals and had previously escaped from one such Island institution, Camp Hill at Yarmouth, and attempted to sail a small boat to the Mainland. On that occasion, he was caught and sent to Rochester, Kent before escaping yet again. He made his way back to the Island,  stole some cash from houses in Ryde and paid for two short duration flights as a passenger at Somerton Airfield, Cowes, quizzing the pilots on their instruments as they flew along.

He then made his way to Bembridge and having broken into the Sailing Club and stolen money and a pair of binoculars he arranged another half hour joy ride as a passenger in an Auster carefully watching every action the pilot made. Having then stayed around until nightfall he broke into the hanger moved two other aircraft and a crash tender out of the way before pushing an Auster Autocrat registration G-AGVL out onto the airfield. Climbing in, he started the engine and roared off into the early evening.

The flight lasted an hour but running low on fuel he was forced to land just outside Cheltenham close to the Severn Estuary. After again going on the run he was finally arrested at Whitchurch Airfield, Bristol whilst attempting to find another aircraft to continue his flight. 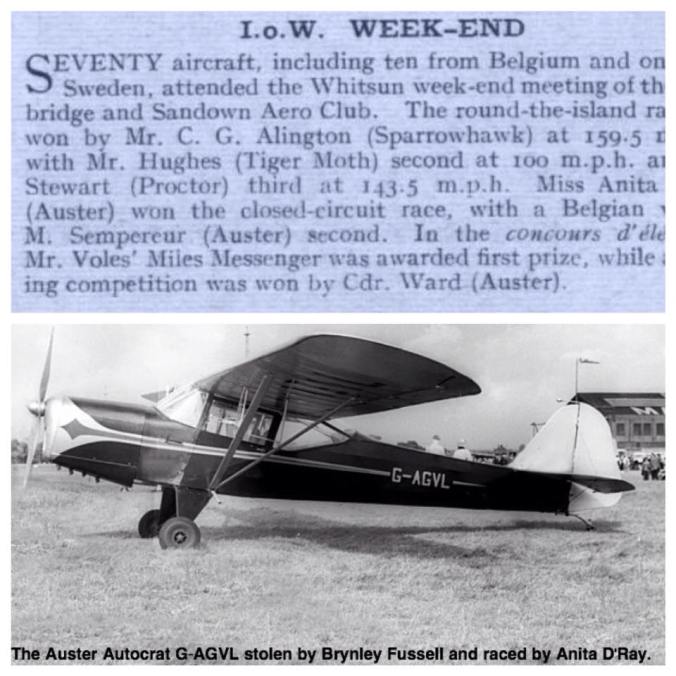 Meanwhile, the stolen Auster was hurriedly flown back to Bembridge and as had been the original intention was prepared for an upcoming Island air race. The pilot was to be Anita D’Ray (born Dorothy Poore) who was a featured dancer at the world-renowned Windmill Theatre, London. At just nineteen she was an accomplished pilot with over one hundred solo flights and had entered the Air Race piloting this privately owned aircraft. Over the Whitsun weekend not only does she enter the international race as one of the very few female entrants but pitted against many well-known international pilots goes on to win it.

Brynley Fussell went on to commit many further crimes including stealing another aircraft and flying to France before eventually settling down and becoming a world-renowned microlight aviation expert gaining his full pilots licence in 1988 some forty years after that first maiden solo fight out of Bembridge airport. Anita D’Ray become an accomplished actress and dance advisor to the film and television industries.

“Tilly” Edinger was born on November 13, 1897, in Frankfurt, Germany. She was the youngest daughter of the eminent neurologist Ludwig Edinger and Dora Goldschmidt, a leading social advocate and acti…

Source: Tilly Edinger vs. the Nazis. | Letters from Gondwana.

Spy, seductress, aristocrat, Baroness Moura Budberg was a mystery to everyone who knew her, even her closest friends and her children.

saloniste; nobody else had the magnetic charm or the air of danger and mystery that surrounded Baroness Budberg, and her soirées attracted Graham Greene, Laurence Olivier, Guy Burgess, Bertrand Russell, David Lean, E. M. Forster, Peter Ustinov – all came to drink …

I have just finished reading the book co-authored by Deborah McDonald and Jeremy Dronfield and it’s excellent.  Sarah Vernon 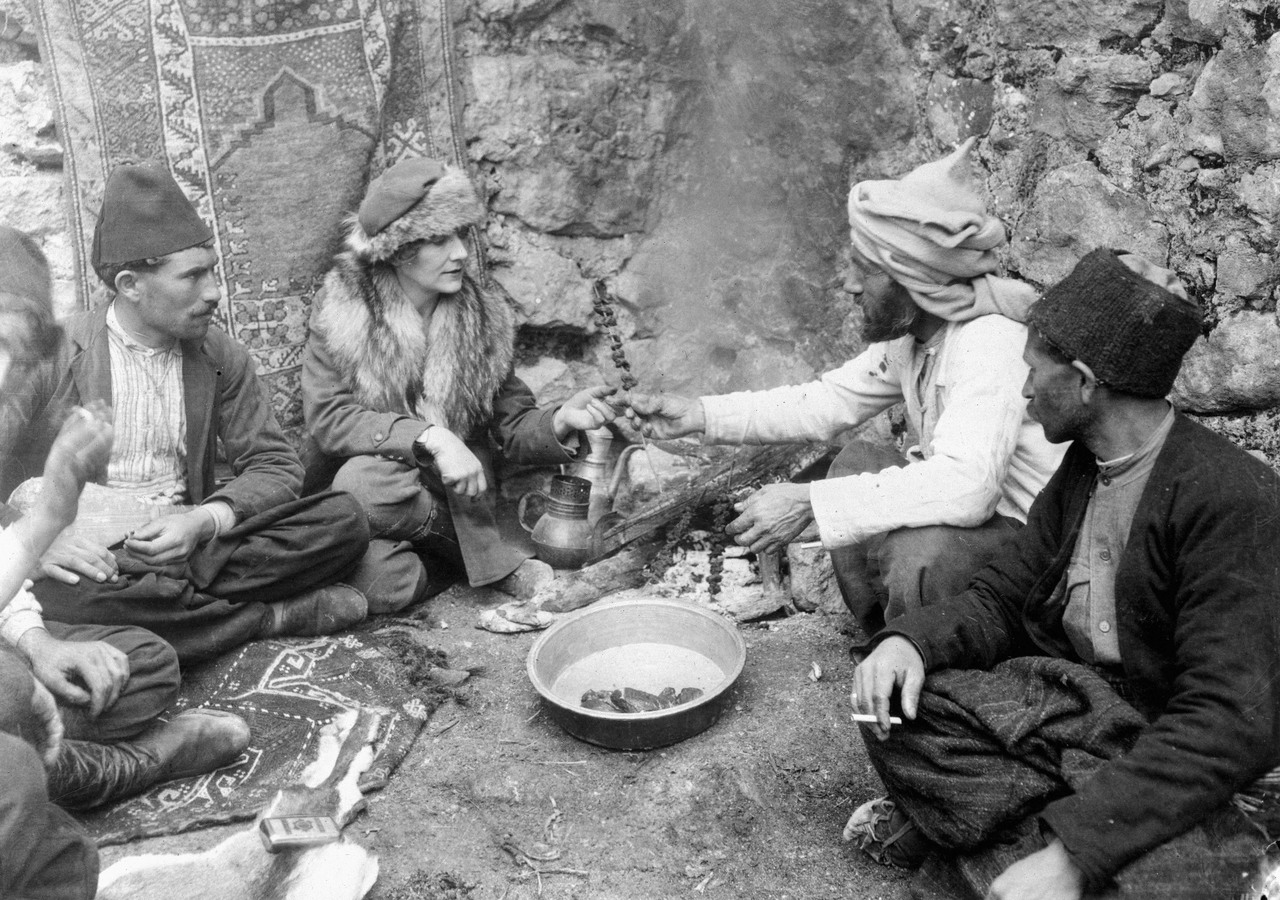 Journalist and explorer Marguerite Harrison shares a meal with a group of Bakhtiari men. (From the documentary A Nation’s Battle for Life by Merian Cooper and Ernest Schoedsack) BETTMANN/GETTY IMAGES

In August 1923, Marguerite Harrison sailed from New York bound for Constantinople. The 44-year-old had returned just five months earlier from Russia where she had been imprisoned, for a second time, on suspicions of espionage. A widowed mother of a teenage boy, Harrison had thought she would…