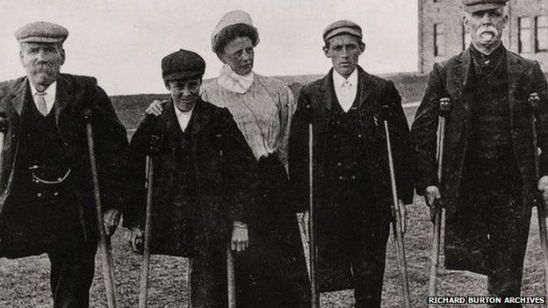 Wheelchair or guide dog users are a common enough sight in the workplace today, but what about 200 years ago?

Research by Swansea University and the Wellcome Trust has discovered disabled people were playing equally as big a role in the coal mines of the industrial revolution in Wales.

A blind lift operator and a collier with a wooden leg are just two of the examples found by Daniel Blackie and Mike Mantin during a five-year study into disability and industrial society between 1780 and 1948.

But Dr Blackie, whose research focused on the first half of the period up to 1880, said that did not necessarily mean it was a time of equal opportunities.

He said: “There’s a perception that people with disabilities faced enormous social and economic exclusion during the 19th Century, but what we’ve found is that isn’t strictly true.

“We have numerous examples of people who’ve experienced disabling injuries and illness playing a full part in the mines, and coming up with ingenious ways of helping themselves to adjust.

“But what you quickly realise is that these aren’t all…

4 thoughts on “What role did disabled people play during industrial revolution? – BBC News”