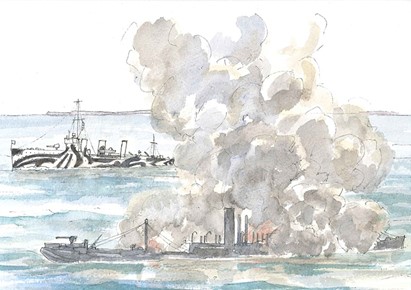 Painting inspired by research into the loss of SS War Knight. War Knight ablaze in the foreground with Lysanda standing off behind. Picture courtesy of Mike Greaves.

THE tragic but forgotten tale of the collision of a steamer and the world’s biggest oil tanker off the Isle of Wight, which resulted in the loss of 34 seamen, is being marked almost a century on.

Thanks to Heritage Lottery funding, the Maritime Archaeology Trust (MAT) will be commemorating the disaster — the collision of the SS War Knight and the American tanker, OB Jennings, on March 24, 1918 — as part of its Forgotten Wrecks project.

Dive skipper and historian Dave Wendes, who has been researching the wreck and crew for many years, is leading the project to tell the tale of the tragic chain of events — and to have formally recognised, the contribution and sacrifice made by the majority of the ship’s crew.

The ships were part of a 16-vessel convoy, designed to protect them, from U-boat attacks.The War Knight crashed into the side of the tanker and caused a massive explosion and inferno, which killed…