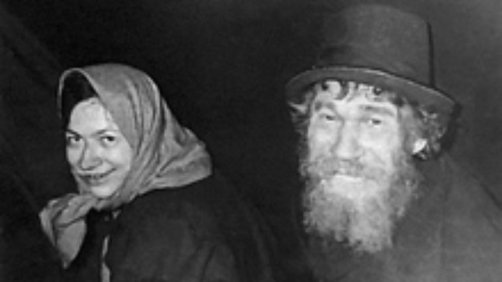 Karp Lykov and his daughter Agafia, wearing clothes donated by Soviet geologists not long after their family was rediscovered.

Siberian summers do not last long. The snows linger into May, and the cold weather returns again during September, freezing the taiga into a still life awesome in its desolation: endless miles of straggly pine and birch forests scattered with sleeping bears and hungry wolves; steep-sided mountains; white-water rivers that pour in torrents through the valleys; a hundred thousand icy bogs. This forest is the last and greatest of Earth’s wildernesses. It stretches from the furthest tip of Russia’s arctic regions as far south as Mongolia, and east from the Urals to the Pacific: five million square miles of nothingness, with a population, outside a handful of towns, that amounts to only a few thousand people.

When the warm days do arrive, though, the taiga blooms, and for a few short months it can seem almost welcoming. It is then that man can see most clearly into this hidden world–not on land, for the taiga can swallow whole armies of explorers, but from the air. Siberia is the source of most of Russia’s oil and mineral resources, and, over the years, even its most distant parts have been overflown by oil prospectors and surveyors on their way to backwoods camps where the work of extracting…

via For 40 Years, This Russian Family Was Cut Off From All Human Contact, Unaware of World War II | History | Smithsonian.

2 thoughts on “For 40 Years, This Russian Family Was Cut Off From All Human Contact, Unaware of World War II | History | Smithsonian”