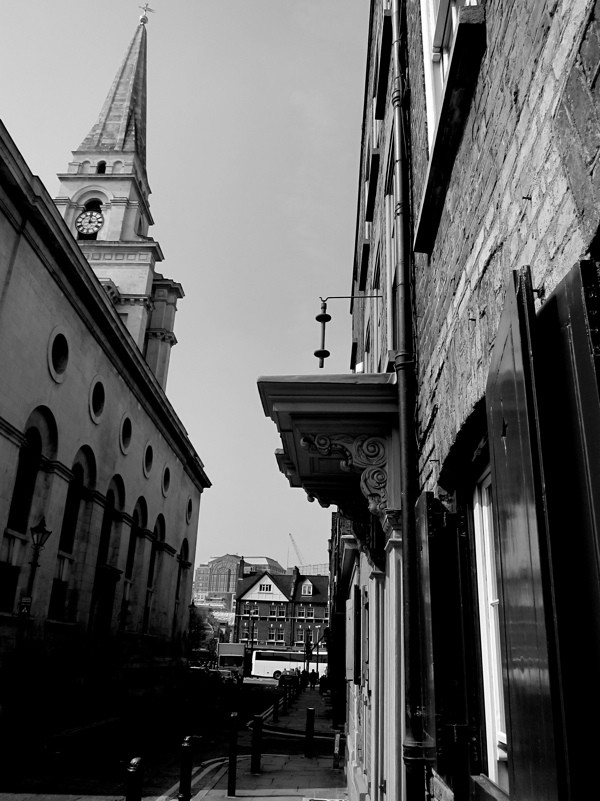 The wooden spools that you see hanging in the streets of Spitalfields indicate houses where Huguenots once resided. These symbols were put there in 1985, commemorating the tercentenary of the Revocation of the Edict of Nantes which brought the Huguenots to London and introduced the word ‘refugee’ into the English language. Inspired by the forthcoming Huguenot Summer which runs from May to September, I set out in search of what other visual evidence remains of the many thousands that once passed through these narrow streets and Dr Robin Gwynn, author of The Huguenots of London, explained to me how they came here.

“Spitalfields was the most concentrated Huguenot settlement in England, there was nowhere else in 1700 where you would expect to hear French spoken in the street. If you compare Spitalfields with Westminster, it was the gentry that stayed in Westminster and the working folk who came to Spitalfields – there was a significant class difference. And whereas half the churches in Westminster followed the French style of worship, in Spitalfields they were not interested in holding services in English.

The Huguenots were religious refugees, all they needed to do to stop the persecution in France was to sign a piece of paper that acknowledged the errors of John Calvin and turn up at church each Sunday. Yet if they tried to leave they were subject to Draconian punishments. It was not a planned immigration, it was about getting out when you could. And, because their skills were in their hands, weavers could…