Originally posted on The Public Domain

Between 1943 and 1945, with the help of Warner Bros.’ finest, the U.S. Army produced a series of 27 propaganda cartoons depicting the calamitous adventures of Private Snafu. Mark David Kaufman explores their overarching theme of containment and how one film inadvertently let slip one of the war’s greatest secrets. 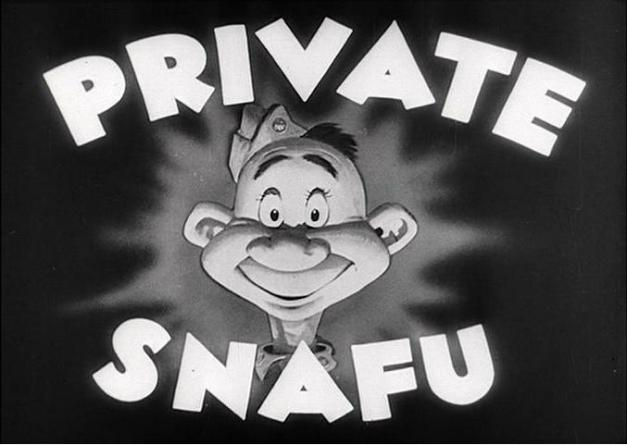 In early 1942, with America still reeling from the attack on Pearl Harbor, Hollywood mobilized for war. Soon, silver-screen luminaries like Jimmy Stewart and Clark Gable were pinning wings to their lapels, making the roster of the U.S. Army Air Forces look like the opening credits of an MGM blockbuster. And while Tinseltown bristled with shiny new uniforms and all-too-perfect smiles, neighboring Toontown was also banging the proverbial drum. From Walt Disney to Warner Bros., the animation studios were letting slip the dogs — and ducks — of war. Donald, of course, was a natural recruit (he’s a sailor, after all). The feathered hero saw action in the jungles of Asia, braving snipers and ravenous crocodiles to single-wingedly wipe out an enemy airbase. Not to be outdone, Daffy proved that he too was a bird to be reckoned with. In 1943, the fowl-mouthed mallard parachuted commando-style behind German lines to wage unholy and untranslatable havoc. Others followed suit: Popeye punched Nazis, Superman sunk ships, and Bugs Bunny peddled war bonds. For these veterans of paint and light, it was a merry war, a loony war, and for none so much as for the army’s secret mascot: Private Snafu.

Every G.I. worth his creamed chipped beef knew the acronym, but when it first appeared on…