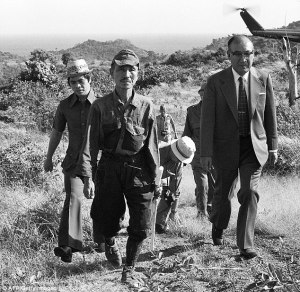 Onoda (second left) walking from the jungle where he had hidden since World War II, on Lubang island in the Philippines

I found this story deeply moving.

Hiroo Onoda was the last Japanese imperial soldier to emerge from hiding. He finally surrendered in 1974 on Lubang island in the Philippines. Onoda’s imperial army uniform, cap and sword were still in good condition.

Two weeks ago, one of the most fascinating story about the war came to an end when a former imperial soldier, Hiroo Onoda died at the age of 91 in Japan. When the war had ended in 1945, and his troops surrendered, Onoda had refused to surrender and hid in the jungles of the Philippines for 30 years. He was accidentally discovered by a traveller, and through conversation, the traveller returned and reported Oneda’s existence to the Japanese army.

When approached, Mr Onoda still could not believe, the war was…

One thought on “The war was not over for Onoda”