By Laurel A. Rockefeller

Henry V is one of the most beloved plays of all time. Though mostly about King Henry’s war with France and his victory at Agincourt on 25th October 1415, the play introduces us to Henry V’s future queen Catherine de Valois from Henry’s decidedly biased point of view.

But was Shakespeare’s version of Queen Catherine truly historical?

Following my successful launch of my short biography Boudicca: Britain’s Queen of the Iceni aimed at primary- and middle-school children in March, I decided to take on this very question. What I discovered along the way now makes me wonder how Shakespeare ever kept his head on his shoulders in light of the fact that Queen Elizabeth I was Catherine’s – but not King Henry’s – descendant. 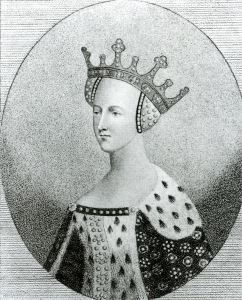 Catherine de Valois was born 27th October 1401 in Paris, the youngest daughter of the paranoid schizophrenic King Charles VI and…